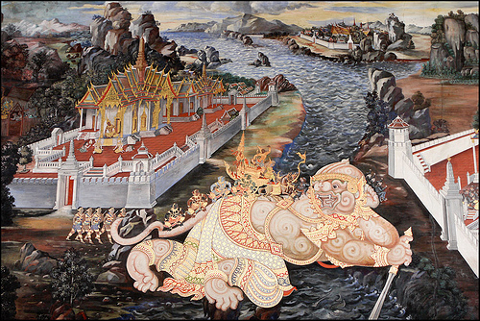 Funding is needed to create a documentary on the Ramayana. A crowd funding campaign will be initiated to leverage the seed funding round.

An online presence will be created for the documentary project using Facebook, Youtube and other social media available today.

People engaged in the campaign will be asked to contribute towards the cause, for which they get special perks and the documentary, once its finished.

(It’s like pre-selling the product with extra specials for the contributors as they help get the product made.)

The documentary, which will already be underway by then, will help us provide updates and video footages to further the social buzz and crowd funding campaign.

During this phase itself, the money collected via crowd funding will start to be routed towards the repayment of the seed fund.

Once the shoot of the project is finished the footage will be edited into two products:

The documentary will be submitted to film festivals and then sold online and via DVD.
The tele-series will also be similarly exploited.

Once the seed fund has been repaid in full, the investor will hold 33% stakes in the company and appropriate profits in all funds collected beyond the seed fund.

The products and the buzz will then be used to put forth a film proposal on the Ramayana – with this new perspective.

The seed investor will continue to hold 33% stake in the company's holdings on the feature film project too.

Crowd funding of media works is the current world wide trend with projects pulling in good money and audience engagement.

The Ramayana is the apt subject for crowd funding.
It is not only well known across the globe but also surrounded by emotional attachment and scientific evidences to its possibility.

Being such a universal topic we can create good media attention and fuel the crowd funding campaign to bring this cultural gem to the international film scene.

Even as the documentary is being made, our crowd funding campaign will be promoted to bring in contributions from the masses.

The funds will be used for creating the documentary, advertising, promoting the crowd funding movement both online and offline.

This is not an opportunity for everybody. It is recommended for strong financial players, who are aiming to go big. By going the crowd funding route much risk associated with the media have been mitigated.

But, as can be seen the project is an ambitious venture with worldwide reach and media attention. We endeavor to build a media brand that produces an international project.

Angel Investors Needed for a Documentary Film on the Ramayana Epics