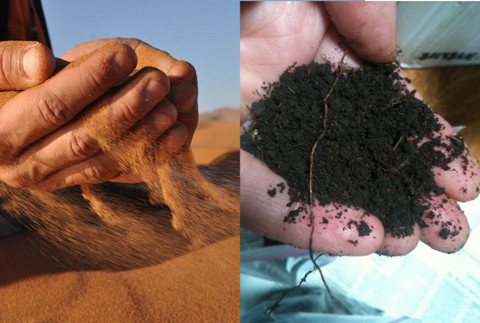 Soil Development Product (own tested innovation) for Arabic countries with no agricultural land and buy or rent it. We need funds for equipment, working capital, and marketing internationally. The project is offering shares to investor. The result from the project will transform the sand in a new black fertile soil.

The project introduces MEOF X innovation that transforms the sand in a black fertile soil. Arabic countries that export petrol need to create their own agriculture. Often they buy or lend agricultural land overseas. Our product will create a new model of agriculture, efficient and environmentally friendly.

Revenue is based on manufacturing for export on contract-based production.

Ecological agriculture linked with the needs of rich countries without fertile soils will create a niche that must be exploited. To this must be added the fact that in South Africa and in other countries the governments spends billions for control of invasive alien plants (IAPs).

Millions of tons of green raw material is wasted. MEOF is formulated from these wasted renewable resources. The author of the innovation Dr John Morris has work experience in anti-desertification projects in Iraq, Egypt and in sandy soils of Romania. The innovation springs from that experience.

In South Africa Dr John Morris developed MEOF B and registered it with the Department of Agriculture by obtaining grants from the government since 2001.

MEOF X is an advanced innovation based on MEOF B, which is working faster and must be applied at every three to five years only.

The product was tested in Romania, South Africa and Mozambique on sandy soils.

If an investor is find, within six months first quantities will be ready for export. A new innovative technological process was designed in order to reduce the operations and to make possible to be done over 65% on site.

Potential buyers were identified and an innovative marketing system was designed: a pilot farm will be exhibited and collaboration with local universities and agricultural colleges will be developed in order to spread knowledge about product and its benefits fast.

A large number of students and local people will be involved in this project as well as the collaboration with the environment control state organizations will be strengthened.

In order to start fast, a minimum one million USD is required and it will be used for machinery, production space, exhibition farm, marketing and working capital.

Collaboration with other scientific and regulatory organizations will be extended as well.

For the investor we offer optionally: shares, payback period, ROI, etc. This will become a very large operation, involving many countries and people.

Until date, for R&D, we worked with Nature Conservation entities and students only.

Eco-friendly agriculture in general and agriculture on sandy soils in special became an important issue. Until date, we do not have knowledge about a similar product. To design this product and to be sure that it is totally different from other existent, Dr John Morris travelled in North and South America, Europe, Asia, Australia and Africa and studied all existent methods, ideas, and research on soil sciences.

To make from river sand a new black and fertile soil, an enzymatic formulation combines knowledge from many sciences and cannot be made in laboratory. Also, permanently, new R&D and formulations are added in order to speed the biochemical processes that energise a real natural soil formed between 200 and 2000 years or more.

Our advantage will least as long as the patent laws will protect it and as long as we will not stop to add new knowledge to the products.

Extractive methods and formulations are not patented until production is ready for start.

Of course, it is possible one day - some people will try to copy it.

The Arabic countries suffer from lack of fertile soils. Rich oil producers already started to buy agricultural land in Europe, Africa and America, but they cannot move those soils in their countries. All forms of artificial soils and improvements, didn't gave positive results.

Even former rich soils of North America, South America, Europe and Asia are destroyed by a variety of factors, over fertilization and irrigation included.

Their governments are spending enormous amount of money in local agriculture, in research and in other forms of improvements, but they never thought that their sandy land (desert) could become arable.

This demand will last for a long period of time because the climate change plays an important role as well. Millions of tons of fertile soil is degraded and moved to the oceans and land care programs are not successful.

We will make money by helping Nature to replenish what people or natural disasters did. In South Africa three tons or more of soil is lost per hectare every year due to a variety of soil degradation factors. The same thing is happening all around the world.

Until this date we do not have knowledge about other market players on this field: creation of a new soil from pure sand.

Our experience consists of anti-desertification programs, afforestation in desert (Luxor, Egypt), large irrigation systems (in Romania, sandy/rocky soils and Iraq, desert). The new product is the result of many years of experience and R&D on this matter.

The desire is to put on the market a new product, based on long time experience and R&D and to create something very "new" for export in areas where people has money and need our product.

First an injection of $1M will be needed for start up production. According with the results from the first stage (market demand), probably that it will be necessary another four million US dollars for expansion: mostly for raw material on extended field operations and to increase the formulation base or basses if it will be necessary to operate in many countries.

An investor must make money. Our project is unique and has the opportunity to grow fast because the demand, once started, will be bigger than our possibilities to supply. Also, we must follow logic steps of development on time and geographic area, discuss with local end users (farmers, companies, departments) as well as with suppliers of ram materials (nature conservation entities and departments. For this, we need to have enough big room for unavoidable situations as: bureaucracy, marketing style, time for processing, time for transport, time for new soil to develop, etc. Thus, we can forecast the following:

Debt investment: one million USD, for five years, at a double interest rate of an investment bank.

Equity Investment: 30% shares and 50% from the annual company's dividends. We expect minimum ROI to be 30%. IRR we expect to be at maximum possible after two years of activity.

We expect hands-on or silent investor, preferably a hands-on investor.

In our case, the desired investment instalment schedule must be four months.