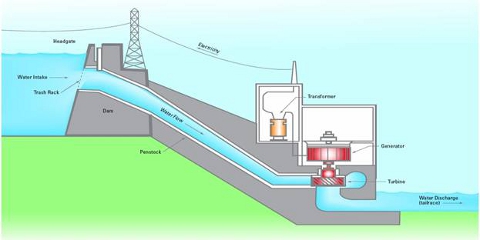 The required funding will go towards the capital costs of the generating plant and equipment, investigating further retrofit and other renewable energy options.

There is an opportunity to install a 1.2Mw hydroelectric power generation plant in Zimbabwe. There are also retrofiting opportunities to increase the amount of energy generated. This can open opportunities for interested parties to penetrate the lucrative energy sector in the Sub-Saharan Africa.

Installation of Hydroelectric generator on an already constructed dam wall with a 40m head. Electricity to be sold to the Power utility company at US$0.10/kwh.

The project is anticipated to commence 6 months from the release of the capital funds and full production is expected within18 months of releasing of funds. This takes into cognizance the construction and concrete work of the Dam wall modifications. Once commissioned, the life span of the project is 25 years, unless expansion and technology demands otherwise.

The project will be implemented with experienced project management consultants according to the guidelines of PRINCE 2 and PMBOK 2008 so as to exercise international best practice in the execution of the project.

Implementation of this project will yield the following benefits:
1. A profitable venture to the investor, the payback period, NPV and IRR are at competitive rates comparable with international lending rates.
2. Establishes a platform for the possible launch of the next largest energy company in Zimbabwe.
3. Environmental preservation of the flora and fauna in the environs of Sebakwe Dam, as there would be reduction in deforestation.
4. Critical in contributing to the reduction in Carbon Dioxide sequestration into the atmosphere.
5. Creates multiple employment opportunities for the local people as a spinoff from the energy thus generated.
6. Contribute significantly to the development of Zimbabwe as there is a reduction in the quantity of energy imported, an important aspect in the balance of payment.
7. The project can also run in tandem with a fish farming venture, which can form the immediate power feed-point.

This mini-hydropower generation plant, at 1.22MW is considered small by international standards, however, it represents a milestone in Zimbabwe as it permits entrant into a relatively unexplored sector of the Zimbabwean economy, and goes a long way towards opening up industrial options in the rural areas around the dam and minimization of Carbon Dioxide Sequestration in the air. This 1.22MW input, out of the current 1500MW currently accessible to the nation of Zimbabwe is significant. The Country has an energy shortfall of over 1000MW.

The required funding will thus go towards the capital costs of the generating plant and equipment, investigating further retrofit and other renewable energy options at and around Sebakwe Dam, and the cost of maintaining and operating the plant in keeping with international best practices.

With over 134 hydro-electric potential sites in Zimbabwe, representing more than 724MW of energy generation, the Sebakwe Dam Hydropower project represents a good entry point into the business, allowing accumulation of reasonable data and experience for a larger and better approach into the sector.