Although Russia has a global image of an oil and gas supplier, the overwhelming size of the country implies a strong development potential for all renewable energy resources as well and current trends of state policy in the sector look more and more attractive to investors, according to a research commissioned by the Merar Investment Network and published by ADP news. 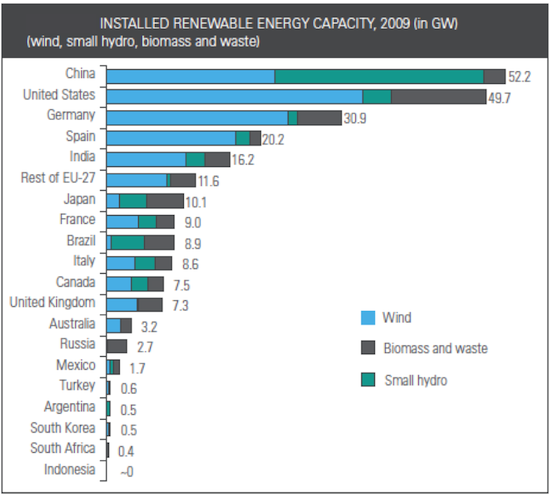 The accepted wisdom is that Russia, home to the world's largest natural gas reserves, the second largest coal reserves, and the eighth largest oil reserves, hardly needs to tap the expensive green energy sources but in fact there are a number of factors that can drive demand for energy-saving solutions and usage of renewable energy sources in the country.

Although Russia as a whole exports energy, most of its regions import fossil fuels from the few energy-rich ones. Transporting fuel over vast distances dramatically increases its total cost and increases the risk of disruptions in supplies. If more regions exploit locally-available renewable energy resources, that could improve energy security and reduce costs.

For example, geothermal plants are viable in Kamchatka, the Kuril Islands and the North Caucasus.

Large-scale use of biomass energy is cost-effective in north-western Russia, which has a well-developed pulp and paper industry.

Wind projects can become commercially attractive in far eastern coastal areas, in the steppes along the Volga River and in the North Caucasus. One study suggests that developing just 25 percent of Russia's total wind power potential will lead to the installation of 175 GW capacities.

As Russia is home to 9 percent of the world's hydro resources, many regions enjoy favourable conditions for small-scale hydroelectric power.

Solar is reasonable in the southern region.

Climate change concerns are also not to be ignored when considering possibilities for Russian energy market development. Public opinion has started to warm up to clean power, especially after the fires disaster Moscow suffered this summer.

Even the generally high price tag of renewable power may soon be not so high at all. At present, domestic gas prices are state controlled and are often kept below cost, as are electricity and heat tariffs. However, Russia has declared it wants to gradually move toward market-based pricing and plans to increase domestic fares on energy carriers up to European levels. Such a move will inevitably lift gas prices, opening new opportunities for renewables.

Russia's government has already come to realize these opportunities and has begun to place a greater focus on the development of alternative energy.

A new national energy strategy until 2030, approved by the Russian government in November 2009, aims to reduce Russia's dependence on fossil fuels by increasing the share of renewable sources in its energy mix.

In May this year, Russian President Dmitry Medvedev announced a set of ecological directives, including measures to enforce mandatory purchase of energy generated from renewable sources.

Medvedev has also proposed the establishment of a single federal authority in charge of coordinating ecological supervision in the country to ease bureaucratic burden of project development. At present three state agencies are involved: the Ministry of Natural Resources and Ecology, the Russian Federal Service for Natural Resources Management Oversight (Rosprirodnadzor), and the Russian Federal Service for Ecological, Industrial Production, and Atomic Supervision (Rostekhnadzor).

The government was instructed to develop a comprehensive legislative package and present it for consideration by the Russian parliament, the State Duma, before December 1, 2010.

With the general improvement in political outlook, several major renewable energy projects were announced in Russia in recent months.

In June, Russia's energy company RusHydro and Italy's Enel have signed a memorandum on hydro-energy cooperation.

In July, German industrial conglomerate Siemens signed a partnership agreement with two Russian companies, Rostechnologii and RusHydro, planning to develop 1,250 MW of wind capacity by 2015. The German engineering giant said it would build wind farms across Russia and set up 3 joint ventures to manufacture products for them locally.

Siemens's investment announcement came on the heels of the news that Russian oil and gas major Lukoil and Italian ERG Renew have signed a letter of intent to cooperate onrenewables development in Russia and eastern European countries.

In August, Adolf Chernyavsky, the chief specialist of the Rostovteploelektroproekt engineering company, told news agency RIA Novosti, that his company intends to inject USD 200 million in a 100 MW wind power project near the southern city of Yeisk, close to the Azov sea as well as a 13 MW solar plant, the first of its kind in the country. Chernyavsky said that the construction on the project, to be located in Kislovodsk, may begin in 2011.

Overall, the renewable energy industry in Russia remains largely undeveloped, hindered by low tariffs for conventionally sourced electricity and lack of clear rules for operating in the sector. The incumbents in the renewable energy market are fairly consolidated and it still looks more viable an existing utility company to diversify into the provision of renewable energy than a brand new company to enter the market.

However, the liberalization of the market following the transformation of the state-owned monopoly RAO UES into several state-owned and private companies, the new national energy strategy and the forthcoming legislative changes aimed at improving the investment climate for clean power, are a clear sign that this vast potential may soon be open for development even to foreign investors.

Besides recently announced international projects, the leaders in renewable energy development in Russia are of course Russian companies.

RusHydro ( www.eng.rushydro.ru) is Russia's biggest hydro-generating company and the second biggest in the world in terms of installed capacity – over 25 GW as of January 2009. The company is active in the generation, transmission, and distribution of electric energy through water flows, tidal, wind and geothermal sources and currently has 55 renewable power source facilities.

These include the Neporozhniy Sayano-Shushenskaya HPP, the biggest both in Russia and in Europe (6,400 MW), the 9 power stations of the Volzhsko-Kamskiy Cascade of HPPs, with aggregate an installed capacity exceeding 10,103 MW, the Zeyskaya HPP, which is the pioneer of large-scale hydroelectricity production in the Far East (1,330 MW), the Bureyskaya HPP (1,975 MW) and several dozen hydro-electric power plants in the North Caucasus, as well as geothermal power stations on Kamchatka.

INTER RAO UES OJSC (www.interrao.ru) is active in cross-border deliveries of electric power from thermal, nuclear and hydroelectric power plants. It is the only company in Russia that is allowed to engage in both generating and trading energy. It currently heads more than 20 companies based in 14 countries including Russia, Finland, Georgia, Armenia, Moldova, and Norway. It has a total installed capacity of 18 GW.

Irkutskenergo (en.irkutskenergo.ru) generates, transmits and distributes hydro and thermal power in Russia and Siberia. It operates three hydropower plants (HPPs), including the Bratskaya (4,500 MW) and the UstIlimskaya (4,320 MW). The overall installed capacity of the Irkutsk power generation system stands at 12.9 GW.

State Legislation and Tax Incentives for Renewable Energy Russia's energy policy is mostly outlined in a document created in 2003 which plans out to 2020. Over the last decade, significant steps have been taken to reform the Russian energy sector, including privatisation, demonopolisation and diversification of the energy mix.

A new national energy strategy until 2030, approved by the Russian government in November 2009, aims to reduce Russia's dependence on fossil fuels by increasing the share of renewable sources in its energy mix.

In May this year, Russian President Dmitry Medvedev announced a set of ecological directives, including measures to enforce mandatory purchase of energy generated from renewable sources.

Medvedev has also proposed the establishment of a single federal authority in charge of coordinating ecological supervision in the country to ease bureaucratic burden of project development. At present three state agencies are involved: the Ministry of Natural Resources and Ecology, the Russian Federal Service for Natural Resources Management Oversight (Rosprirodnadzor), and the Russian Federal Service for Ecological, Industrial Production, and Atomic Supervision (Rostekhnadzor).

In short, legislative and normative base for renewable energy development in Russia is still in the forming stage. The government is expected to develop a comprehensive legislative package and present it for consideration by the Russian parliament, the State Duma, before December 1, 2010.

Russia closed 2009 with only 2.7 gigawatts of renewable energy capacity installed, mainly biomass, according to the “Who's Winning the Clean Energy Race? Growth, Competition, and Opportunity in the World's Largest Economies” report published by PEW Trust in March 2010.

Still, according to calculations of Datamonitor Group, the Russian renewable energy market, calculated as the volume of green electricity consumed, totaled 166.3 billion kilowatt-hours and generated revenues of USD 10.7 billion in 2009. That performance is forecast to accelerate at a compound annual growth rate of 3.7% between 2009 and 2014 reaching USD 12.8 billion by the end of 2014 with a volume of 229.8 billion kWh.

As vast a territory as Russia offers tremendous potential for renewable energy development.

For example, hydropower is one of Russia's greatest energy resources, making up about 21% of total current generating capacity, although it only accounts for about 16% of production.

Russia is currently the world's fifth largest producer of hydropower, at about 167 TWh/year (BP Statistical Review of World Energy, 2009), and only about 18% of its hydropower potential has been developed.

The case with other renewable energy sources is pretty much the same.

Russia is one of the largest countries in the world and is situated in different climatic zones, which result in high wind energy potential. According to data from the Russian Wind Atlas, published by the Russian-Danish Institute for Energy Efficiency and Riso National Laboratory, the highest wind energy potential is concentrated along Russia Federation seacoasts, in the vast territories of steppes and in the mountains. The regions most favorable for wind energy use include the North of Russia and Far East.

The technical potential of solar energy was estimated as 18.7×106 GWh, with an economic potential around 1×105 GWh per year in the national report titled “Role of renewable energy sources in energy strategy of Russia”.

The available resource potential of biomass in Russia is practically inexhaustible: it includes significant reserves of bioenergy - in agriculture, arable land - 9% of world; in forestry - up to 25% of world's timber reserves.

According to the Institute of Volcanology, Far East branch of Russian Academy of Sciences, the geothermal resources near Kamchatka are good enough to fully supply it with electric power and heat for more than 100 years. Besides the high temperature Mutnovskoe field with capacity of 300 MW(e) located in the south of Kamchatka, there are known rich geothermal resources at Koshelevskoe, Bolshe Bannoe and Kireunskoe (in the north) fields. In total these fields may produce about 2,000 MW(e).

Russia's nuclear plants, with 31 operating reactors produced 160 billion kWh in 2009, accounting for 16% of the total.

Prime Minister Vladimir Putin recently showed again his support for the sector. “...nuclear power generation is the only available alternative to oil and gas today”, Putin was quoted as saying at the VII annual Valdai Discussion Club forum. The global forum for, mostly, foreign experts on Russia, invited for a sustained dialogue about the country's political, economic, social, and cultural development took place last month in Sochi.

As the share of nuclear energy in total power generation was only 16 percent in Russia, compared to over “25 percent to 30 percent in many European countries,” Putin said, “in this respect, we even need to start catching up with developed industrial countries.”

Download this report or read it in full screen