Since last September, China’s overseas IPOs have taken place one after another in a quick succession. Even during the National Day holiday in China, which lasted from Oct.1 - 7, there were several Chinese firms that landed on overseas capital markets, including Mingyang Electric’s IPO on the NYSE and Lanxun Precision’s public listing on the NASDAQ. Among these overseas IPO debutants, there were a few big-names, such as SouFun, MicroPort, Dr. Frog, CSC and Besunyen, and most of them were backed by VC/PE institutions at some points in their developmental process, suggesting a rising trend of capital exits via overseas IPO sought for by institutional investors . 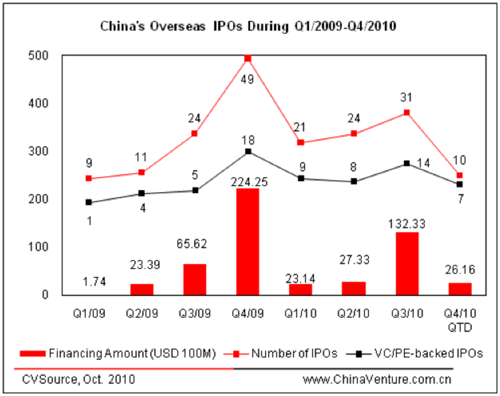 Most of China’s overseas IPO debutants in this October have been backed by some investment institutions, indicative of a rising trend of investment institutions seeking for exits via overseas IPO. The average book ROI for IPOs in the HKEx since the third quarter dropped slightly compared with the first half of this year, while the figures for IPOs in both the NASDAQ and the NYSE registered a dramatic increase (as shown in Figure 2). One of the telling stories was SouFun. The company listed in the NYSE on September 18, 2010, bringing about an eye-popping book ROI of as high as 107.2 times to its backer, IDG capital, 11 years later, the highest ROI for overseas exits seen in the recent years. 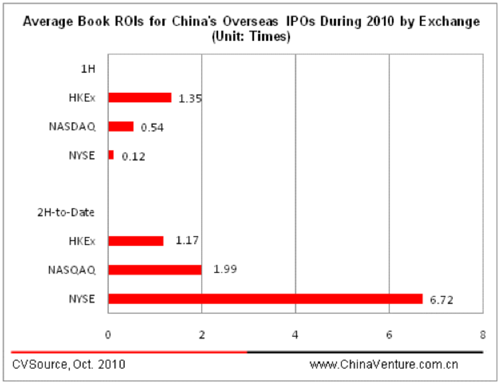 The boom in overseas exits were attributed to various factors: sustained recoveries in major economies, coupled with continued pickups in international stock markets for the past few months, contributed to the increasing activity in public offerings. On the other hand, China’s overseas IPO debutants largely came from a few emerging or high growth sectors, such as TMT, alternative energy, consumer goods and education, which will be sure to benefit from the vast and ever-expanding domestic markets, as a result, these companies were overvalued on international capital markets.

In ChinaVenture’s opinion, not only will a rising activity in China’s overseas IPOs contribute to the performance of foreign institutions, especially USD-denominated funds, but also will give RMB-denominated local funds much more say in their fundraisings. Meantime, the latest development on international IPO market will also prompt investment institutions to adopt multi-currency investment strategies, and increase their allocations in their investment portfolios for local enterprises.

Download this report or read it in full screen

Renewable Energy in Russia - A Giant Yet To Be Awakened