We often deliberate on the internal business climate and the ample opportunities the Chinese market offers to foreign investors. But it’s worth turning the perspective the other way round and analysing the behaviour of the world’s second biggest economy as an investor itself.

In 2010, after three decades of extraordinary growth, China surpassed Japan by reaching GDP of $5.9 trillion against Japan's $5.5 trillion (Economist 2011). Since then it is the second largest economy in the world, “a leading dragon” on the global arena (Lin 2011). Even the afflictions of the global crisis didn’t stop the growth trend which is expected to carry on in the future, even though in slower paces (Rapoza 2012).

Naturally, the economic strength and growth are fuelling the country’s capacity to invest abroad. Whereas until the early 2000s the Chinese overseas investments were rather a negligible factor in the global economy, they are progressively gaining on scale and importance in the last decade (Armstrong 2012). The Chinese approach to investment seems to be getting more active and aggressive with the time, the money flowing out of the country “rapidly becoming China’s main export” (Sender 2012). For the period 2005 – 2011 this outflowing capital accounts for $443.2 billion (Scissors 2012).

Let’s see where the world’s fastest-growing economy invests its own capital. To answer this question, we’ll refer to a research compiled by Dereck Scissors (2012) for the Heritage Foundation, the central insights from which are captured in the infographic below.

The data reveals that greatest investment target is Australia, where China has invested $42.5 billion for the period 2005-2011. Industries of particular interest are Iron Ore, Coal and Gas.

The second-largest target is the US, where Chinese investors focus mainly on the Finance sector but are recently also attracted by opportunities from the Resources and Manufacturing industries. The overall investment for the period amounts $34.8 billion.

South America is a traditional target of Chinese overseas investments, China becoming the third-largest investor in Latin America in 2010 behind the US and the Netherlands (Ludeña 2012). Therefore, it is not surprising that investment target No.3 is Brazil with $24.6 billion invested, predominantly in the Energy sector.

Following is Indonesia with $19.9 billion, where most favoured are the Metals, Transportation and Power domains.

Greatest investment destination within Africa is Nigeria ($18.1 billion), where China invests primarily in Oil and Construction.

In total, the main sectors that have attracted Chinese investments are Energy ($192.1 billion), Metals (84.1 billion) and Transportation ($71.9 billion).

The fact that Chinese FDIs are performed mainly by stately owned enterprises (SOEs) and the scale of the investments sometimes raise concerns and protective reactions in the target countries. Australia for example introduced a new law in 2009 imposing corporate governance requirements to FDI investors in the country, which seemed to be a challenging threshold for Chinese SOEs. Main issue is that corporate governance is a relatively new concept in China that comes in tension with the different business culture and the strong government influence on the market (Huang 2011). 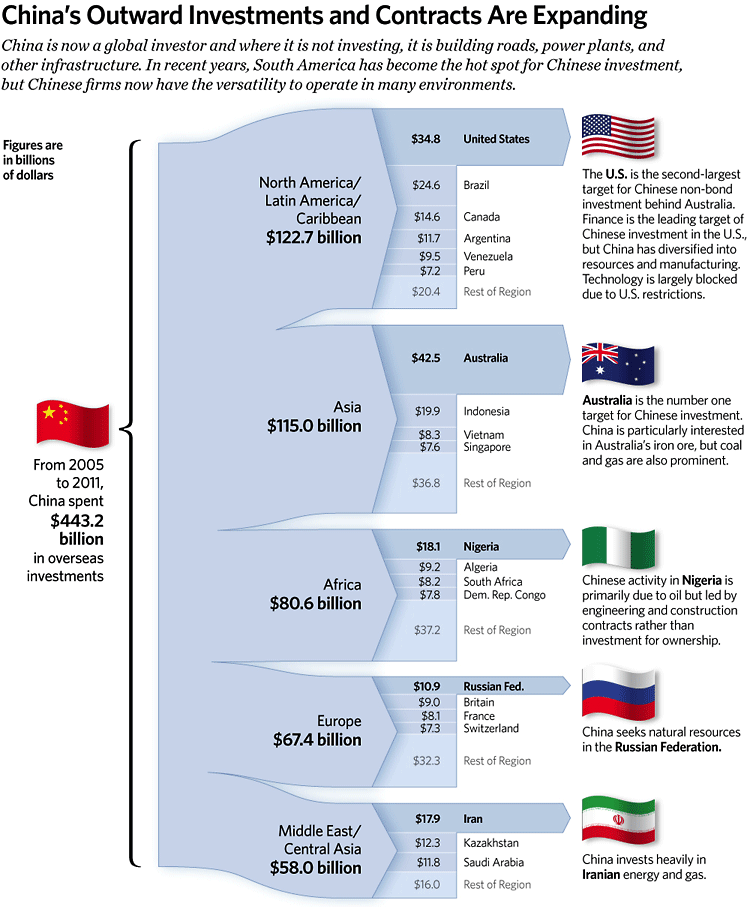 Investors: How Much Do You Really Know about Investing in Facebook?

How to Recognize and Avoid Securities Investment Fraud?